The popular free Select Menu plugin is now faster! I guess one could say it’s a speed bump in that its speed has been bumped up. Then again, its speed bump has been the result of removing (unless you want it) a speed bump, as in those bumps in the road intended to make you slow your vehicle down.

One recent improvement, or so I believed, was when the plugin checked for the existence of various types of objects in the current document and disabled unneeded menu items so as to save users from looking for something that’s not there. In a very large or complex document, however, that search can take a second or two, or longer, so the feature didn’t necessary save much time. With version 16.0.6, the default behavior is to enable all menu items whether needed or not. If you decide you’d rather have the menu parse the current object types, just press the Alt or Option key while selecting the Select > Object menu and the plugin will diligently search like Yoda examining the contents of Luke’s food case.

Did I mention that it’s free? Yup, still free.

Buried not-too-deeply in Adobe’s SDK (Software Developer’s Kit) is a list of pre-defined art object types. While some were included in Illustrator’s Select > Object menu, many more were not. It seemed useful to select the other object types, as well, and objects such as paths had properties that were easily obtained and often helpful to select within an illustration. In that spirit, I wrote Select Menu plugin and, given that it was relatively simple to build and applicable to casual users, I’d make it available for free.

It’s not always clear though, what each object type represents, so please understand than some of these choices are simply passed along to you to use to the extent that Adobe uses them when creating their digital form of your artwork. For example, if you use the Shaper tool in CC 2017, you’ll see in the Layers Panel that a Shaper Group has been created. That object type isn’t in the list, though, so finding them would involve examining every object in the document and examining its structure and properties to select those that fit the definition of a Shaper Group. I hope to find enough data on Shapers, Envelopes, and other objects to add them to the menu, so updates are likely in the foreseeable future.

Illustrator CC added Point Text Objects and Area Text Objects, so Select Menu adds them for CS6 users as well. In addition, it adds the following 27 items for everybody:

I hope the menu is as helpful for you as it has been for me. If it fails to select an object you feel it should, please copy that object into a separate Illustrator document and send it to me as a bug report. If I can find the problem, I’ll fix it.

The topic of item selection can be taken much farther, though, so if you want a real selection power tool, you’ll probably not find one better than Hot Door’s NitPicker plugin, which I find indispensable in addition to Select Menu. 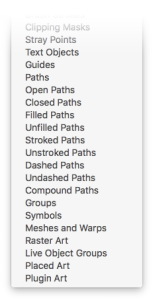 The first Graffix plugin for Illustrator CS6, Select Menu, is now available. Another update is coming for CC versions, soon after other plugins are updated. The next version of Select Menu is expected to add other object types, such as point text and area text. As always, this version is free!

Update: Separate versions are needed for 32- or 64-but versions for Windows.

If you find Select Menu useful, but long for more options, you may want to check out Hot Door Software’s NitPicker panel. It allows you to select art items according to an array of criteria, and save those settings for future custom searches.