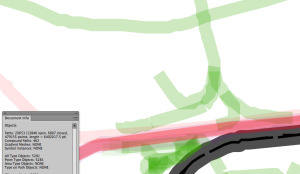 Someday there’ll be a plugin to find and remove duplicate/redundant paths (perhaps I’ll write it, or perhaps there already is but I just don’t know about it). The most important decision in doing that, as I see it, is deciding which path is the primary one and which paths or segments are superfluous. The best way I found to identify and weed them out is to set all suspect paths’ opacity to about 40% to make overlapping paths pretty obvious. Be careful not to set the layer’s opacity instead, as that would cause all paths to become equally translucent, defeating the purpose of this exercise. In this screen capture of an imported GIS file of railroads near Trenton, New Jersey, the pale green lines farther north are single lines that show their increased density where they cross. If it were only always this easy.

The document info panel tells me that there are four open paths and three closed paths in the red east-west section, which explains its darker shade. In a map, multiple lines usually indicate multiple parallel tracks, so they’d rarely have exact duplicate segments, just similar slightly-offset paths. Sometimes cartographers would want to show parallel lines by exaggerating their spacing, especially if the lines are owned by different railroads. If it’s double track or a passing siding, it may be more detail than the map warrants. When one path is sufficient, I found it easiest to locate and pare these path pile-ups down with Smart Guides on, but feel free to use whatever method works for you (who’s to know—who’s to judge—does that really matter?).

What if the cleanup is just too much busywork?

Sometimes, as much as we’d like to optimize our art, there are times when thorough cleanup just isn’t practical. I’ll often simplify the paths by 98-100% to remove the “jaggies” from areas such as rivers, highways, and railroads that should be smooth curves, clean up the problem areas that show, and let the rest go.

Finally, remember to set your path opacity back to 100% and you can rest easy, knowing that you at least know what’s in there and have cleaned up the most egregious offenders.