Now over 25 years as an Adobe Illustrator plugin developer

Hi, I’m Rick, and I make up the entire staff of Graffix. I attended Layton School of Art and Design in Milwaukee in 1972, and began a career as an illustrator/designer in 1976. At that time, illustrations were done on the drawing board with Rapidograph pens and airbrushed inks, and “paste-ups” were done with hot wax or rubber cement.

Like most artists, I did freelance work on the side and before long my small part-time business turned full-time. Here I had the opportunity to learn about the newest technologies of the time, like a refrigerator-sized computer that did digital photo compositing, sort of like a predecessor to Photoshop. I hacked a Commodore 64 computer I bought at the local Target store to emulate a $7,000 AKI typesetting terminal to send my type orders via modem. When work was slow I divided my time between sales and writing my own PC software to predict line endings from coded text files. I challenged myself to set whole pages in position, rather than simple galleys, and was tickled to see that it usually worked.

I contracted out to GE Medical Systems in the early 80s where I worked on a Xerox Star system, the predecessor to today’s graphical computers, and dove into the world of digital art and design. Personal computer illustration software was consistently disappointing, but I later found a gem in Adobe Illustrator 1.1 running on an Apple Lisa (the forerunner to the Macintosh). I found a niche doing cutaways of machinery, and was thrilled when Photoshop allowed me to finally retire my airbrush. 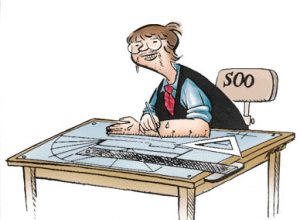 One day at work I noticed a coworker sitting at a $30,000 Unix workstation using a drug store calculator to figure metric conversions for a technical document she was working on. That didn’t make much sense to me, so in 1990 I wrote my first shareware application, Conversion, which later became one of Macworld’s top 30 shareware items. Of course, the Unix operating system offered many opportunities for scripting, as did the high-end technical publishing software, Interleaf. As Illustrator matured to version 5 (not CS5, just 5) in 1993, they began to support plugins and I immediately began writing them. I started with early versions of Concatenate (first called ConnectFragments), Select Menu, Square Up, one to project artwork to or from isometric, and other assorted utilities. I didn’t expect that over 25 years later I’d still be writing Illustrator plugins! When Adobe’s FrameMaker became a formidable challenger to Interleaf in the technical manual world, I wrote another utility, ARTery, to translate illustrations between the two rivals’ formats, as well as to and from Adobe Illustrator.
I went to my current job in book and magazine publishing in 1996. As newer versions of Illustrator added more features, there were always needs for new plugins that arose from the stringent demands of commercial publishing, and new plugins followed to address those needs.

With the release of Illustrator CS6, the bar for developers was raised with significant changes to the plugin API. Fortunately, Hot Door (most noted for the CADtools plugin), made its CORE development library available to other developers and with it I’m making progress in bringing my plugins to CS6 as well as CC versions. I’m excited to be able to upgrade my old plugins for more current Illustrator users, and to pursue ideas for future plugins, as well!

Thanks to all who have supported my development efforts!