Whatever happened to the Proof Block plugin?

Some of you may recall a plugin called Proof Block. It ranked even below the Alien Palette in popularity, although I’ve used it myself at my day job for over 20 years. For the most part, it was little more than a small form to be initialed by people proofing various drafts of artwork prior to publishing. I was inspired to write it by the recurring problem we had of a copy-and-paste version that would sometimes peek back at us from a QuarkXPress graphic frame. My solution was to create a “proof block” layer, place the form on it, then the plugin set it to printable when opened in Illustrator, but non-printing and not visible when closing the document. Crisis solved!

Perhaps you’d still like something like that. It’s really not that difficult to write a script to draw the lines, boxes, and text, but I’m a staunch advocate of using a script, not a plugin, for that now. My proof block script today does everything that the plugin did, and much more. First, we have a document naming convention so the script can discern the magazine name, date, story code, and even look up the editors on its staff. It handles dates, keeps track of proof iterations, and even stores a record of the revision history in the document. When I save the document to the art server, the script saves a copy to the correct folder on the editorial server. If it’s a first draft, it fetches the illustrator’s name from Outlook, looks up the designer’s email and alerts her that art is available to place in InDesign. When the art is approved, it’s marked as such and the related editors, art director, and  designer are notified.

In addition, scripts check for missing fonts, placed art that should be embedded, look for RGB colors in a CMYK document, and more. It’s also much easier to revise than a plugin. Since everybody’s needs and workflow are quite different, it wouldn’t be useful to anybody to share my script, but I will share my enthusiasm for scripting it as one component of a larger process. I promise that once your custom script is used, you won’t look back.

Buried not-too-deeply in Adobe’s SDK (Software Developer’s Kit) is a list of pre-defined art object types. While some were included in Illustrator’s Select > Object menu, many more were not. It seemed useful to select the other object types, as well, and objects such as paths had properties that were easily obtained and often helpful to select within an illustration. In that spirit, I wrote Select Menu plugin and, given that it was relatively simple to build and applicable to casual users, I’d make it available for free.

It’s not always clear though, what each object type represents, so please understand than some of these choices are simply passed along to you to use to the extent that Adobe uses them when creating their digital form of your artwork. For example, if you use the Shaper tool in CC 2017, you’ll see in the Layers Panel that a Shaper Group has been created. That object type isn’t in the list, though, so finding them would involve examining every object in the document and examining its structure and properties to select those that fit the definition of a Shaper Group. I hope to find enough data on Shapers, Envelopes, and other objects to add them to the menu, so updates are likely in the foreseeable future.

Illustrator CC added Point Text Objects and Area Text Objects, so Select Menu adds them for CS6 users as well. In addition, it adds the following 27 items for everybody:

I hope the menu is as helpful for you as it has been for me. If it fails to select an object you feel it should, please copy that object into a separate Illustrator document and send it to me as a bug report. If I can find the problem, I’ll fix it.

The topic of item selection can be taken much farther, though, so if you want a real selection power tool, you’ll probably not find one better than Hot Door’s NitPicker plugin, which I find indispensable in addition to Select Menu.

It’s hard to believe it was 20 years ago that I first wrote the Concatenate plugin to join lines from imported CAD files. In all these years, Concatenate has never seen a price increase or a charge for a compatibility upgrade. Since the CS6-CC version is completely rewritten for Illustrator CC from a new library, it will be treated as a new product, but at the original 1997 price. Improvements are already planned for it so updates are imminent, but since it’s as functional as the original it seems best to make it available to people to add to their CC toolset as I’ve added it to mine. For a limited time, you can take advantage of a 50% discount with the coupon code shown on the product page.

Other plugins will be arriving very soon, as well.

Thank you for your support and encouragement over the years!

Concatenate CC for Mac and Windows 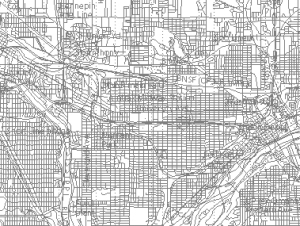 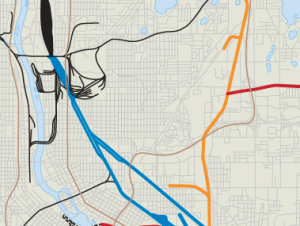 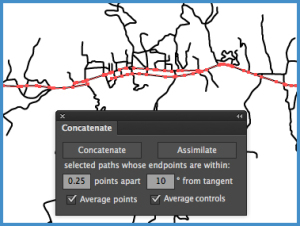 Plugin progress: beta round 2 for CS6 and CC 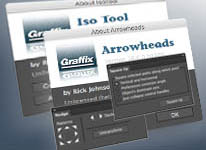 All of the main plugins are now in testing after having been completely rewritten for CS6 and CC. Some of the details are missing, but in many ways they’re already improved over the previous versions. I’d really hoped to have them finished by now, but if you don’t want to wait and are willing to report bugs and overlook some rough spots until the polish is completed, you can start using them now by becoming a beta tester.

Just send me a message that you’d like to test them, state your OS and AI version and a bit about your background with Adobe Illustrator, and I’ll get back to you.  There’s still room for a few more pioneering souls in this group!